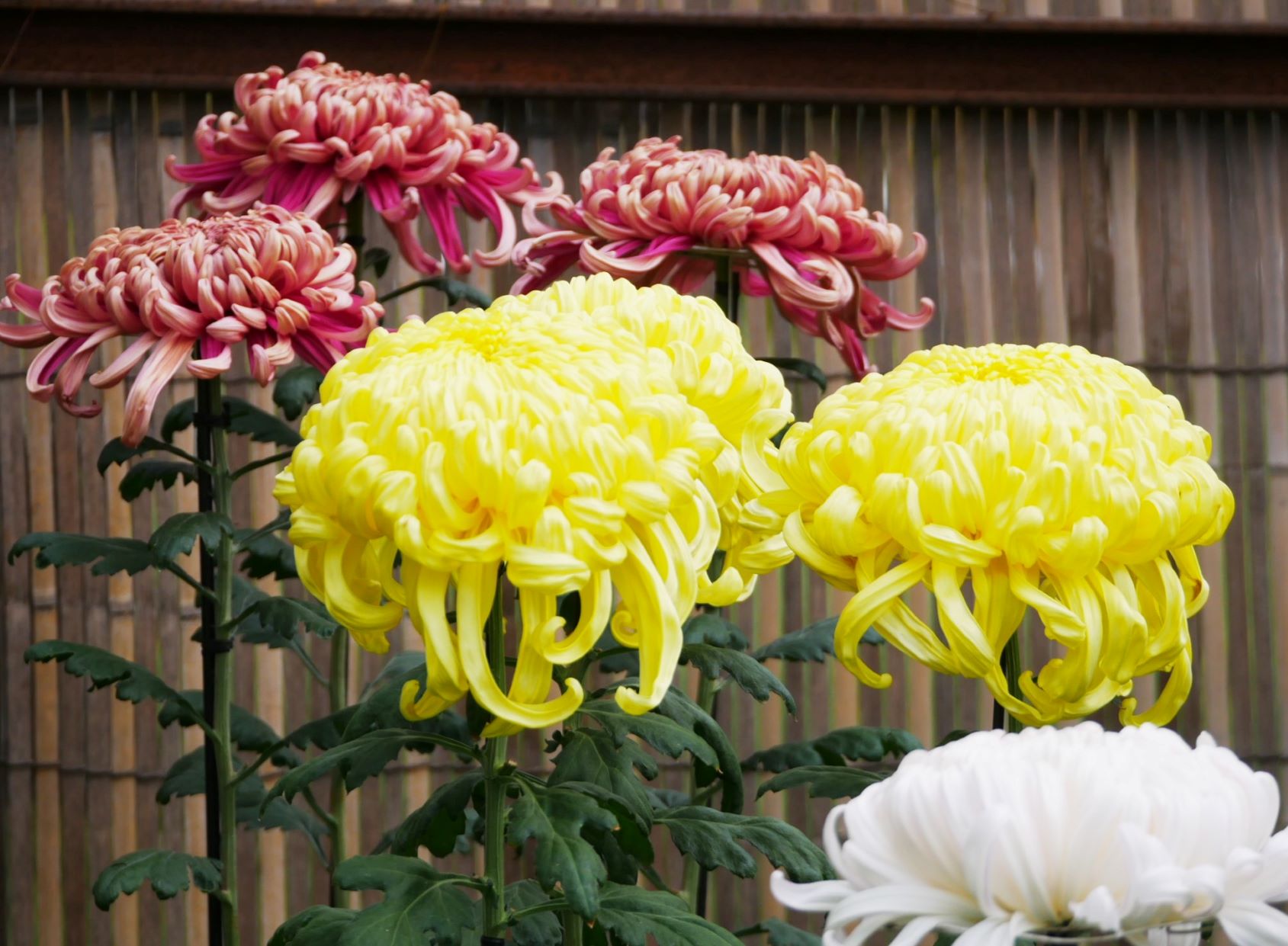 I just finished a new sashiko pattern –  ‘Kiku (chrysanthemums)’. So today I would like to write about chrysanthemums which are well-loved by Japanese people, and along with the cherry blossom, are treated almost as the national flower. For although chrysanthemums originated in China, their importance in legends and customs has been passed from generation to generation, and their name even associated with world famous sake – chrysanthemums have become an indispensable part of Japanese culture.

Originating in China – beloved and indispensable for Japan

Chrysanthemums originated in China and were believed to have the power of life – there were legends that chrysanthemum gave people youth and longevity. A Chinese philosopher said ‘If you would be happy for a lifetime, grow chrysanthemums’ – the boiled roots were used as a headache remedy; young sprouts and petals were eaten in salads; and leaves were brewed for a festive drink.

In the Nara period (710-784) chrysanthemums were introduced to Japan as a medicinal herb with legends and customs such as ‘The Double Ninth Festival’-  a festival held on the ninth day of the ninth lunar month.

Chrysanthemums are an autumn flower. Lead by ‘The Double Ninth Festival (known as the Chrysanthemum Festival)’, you can enjoy the beautiful chrysanthemums and related cultures between September to November in Japan.

If you have opportunity to attend a traditional tea ceremony in the chrysanthemums season, your host might dress in kimono with a chrysanthemum design or offer intricate and elaborate chrysanthemum-shaped wagashi (Japanese sweets.)

The chrysanthemum designs appeared from the Heian period (794-1185) and have developed since then. At the beginning their designs were used on paper and in art crafts, but also on armour and helmets – because people believed the chrysanthemums legends and sought longevity.

A stylised depiction of a chrysanthemum has been used by the Imperial family, by national organisations as their family crests, and graces the cover of Japanese passports.

Chrysanthemum designs are recognised as an auspicious pattern and are very popular in dinner plates for celebratory occasions. If you have opportunity to explore the pottery or even the department store, ask for the design. I am sure you can fine at least one – a very elegant one.

When you travel to Japan, you can enjoy spotting chrysanthemum designs – in textile, porcelain, for the architects etc. – you will be surprised how much Japanese have loved chrysanthemums.

Well I hope you have enjoyed learning a little bit about chrysanthemum. Those who are interested in stitching or crafts, join my sashiko class (face to face or DIY kit) includes the chrysanthemum pattern. Or perhaps you can join me in Japan on one of my many tours with St James Rail.

Takako
一年の大半を外国人のお客様と旅をして過ごしています。旅先で感じたことなどを時々アップしています。シドニー在住。
Personalised group/self-guided travel organiser across the world. From the country on the map to the one where your new friends live.
詳しいプロフィールはこちら