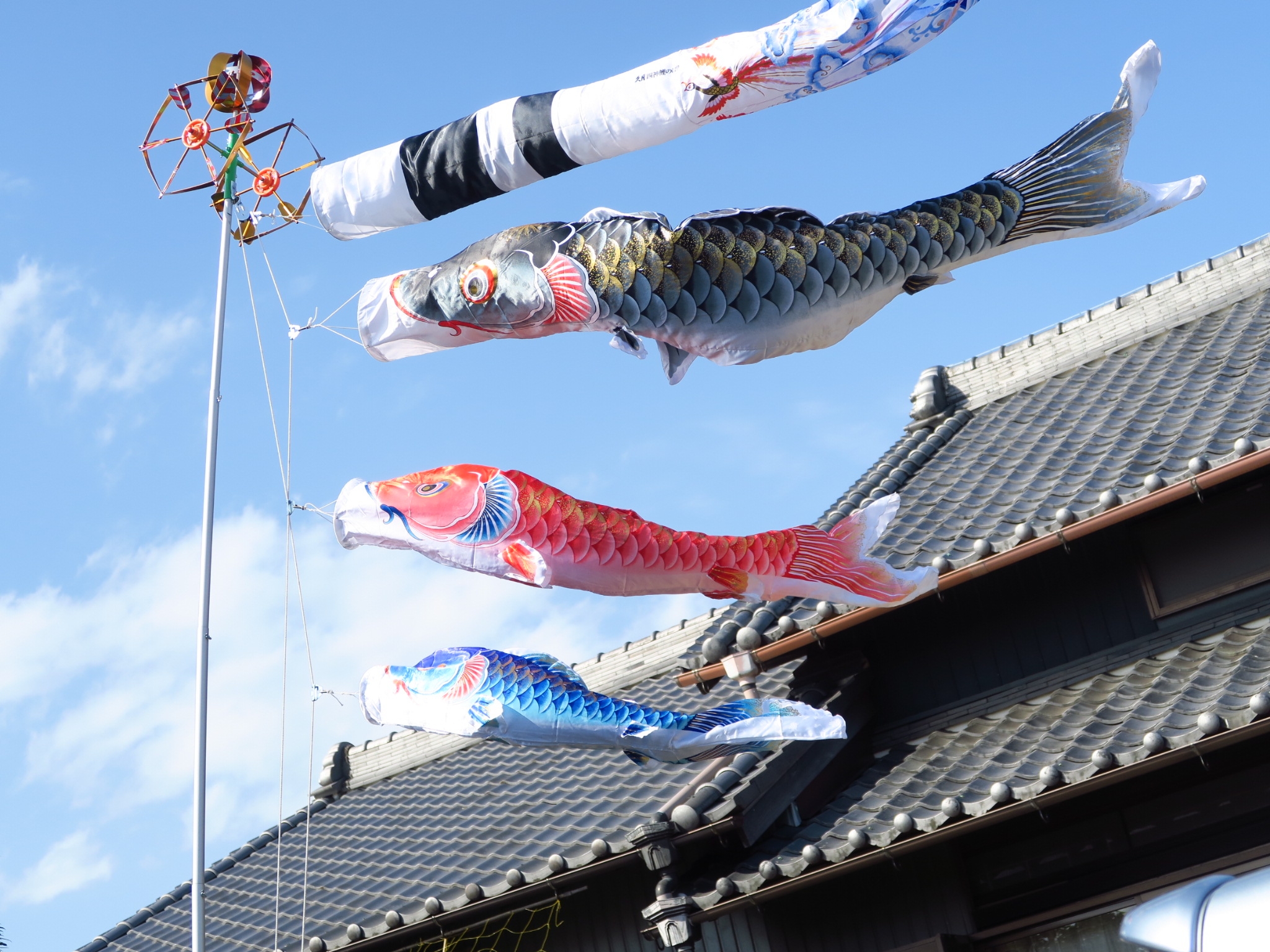 If you have ever been to Japan between mid-April to early-May you have probably seen carp-shaped windsocks. You might also have been told they are ‘Koi nobori’, which are traditionally displayed for Children’s Day. Then you wonder ‘why are carp for children?’ ‘Is carp special for Japanese people?’. Today I would like to write about carp and its history in Japanese history and culture and I hope this will increase and deepen your understanding of Japanese culture and make your next trip to Japan more interesting.

To understand carp in Japanese culture, we need to learn about Chinese mythology. The legend states there was a waterfall upstream on the Yellow River. While many carp swim upstream against the strong current, only few are capable and brave enough to leap over the waterfall. If a carp successfully makes the final jump, it is transformed into a dragon, which is recognised as a powerful and important creature in China.

‘The final exam is not easy, but think of it as ‘The Dragon Gate’!’

What do carp symbolise in Japan

Legend aside, carp are a hardy fish. They can adapt to any environment and survive without any food for at least 1-2 weeks. They are also known for their longevity among fish (about 70 years.)

As in China, pictures of carp attempting to leap falls or carp even themselves have been enduringly popular in Japan and given rise to a new and unique Japanese custom ‘Koi Nobori’ on ‘Children’s Day’.

Culture of ‘Koi Nobori’ on ‘the Children’s Day’

From the Heian Period (794-1185), Japan has had a custom to celebrate boys and pray for their healthy growth. People display long and narrow battlefield flags called ‘Nobori’ at their house entrance wishing that boys grow strong and healthy.

In the Edo period, the long peaceful Japanese era without wars, the battlefield flag was replaced by a carp-shaped streamer by a merchant who was inspired by the aforementioned Chinese myth. These new streamers called ‘Koi Nobori’ (koi means a carp and nobori is a flag) became popular and became standard custom for ‘The Children’s Day’.

As this carp-shaped streamer began in Edo (Tokyo), to view it was unique and we could not see it in Kyoto. The famous Ukiyo-e artist ‘Hiroshige Utagawa’ presents this view in his series of the ‘One Hundred Famous Views of Edo’.

Now you understand a little of the story of carp in Japan (and China). I am sure this knowledge will make your next trip to Japan more interesting. To see ‘Koi Nobori’ I recommend visitong Japan between mid-April to early May.

When you see the ‘Koi Nobori’, you can imagine an energetic carp swimming for ‘The Dragon Gate’.

Takako
一年の大半を外国人のお客様と旅をして過ごしています。旅先で感じたことなどを時々アップしています。シドニー在住。
Personalised group/self-guided travel organiser across the world. From the country on the map to the one where your new friends live.
詳しいプロフィールはこちら